Senior Joe Carter did everything possible to be at his best for the Downers Grove North boys cross country team at the Class 3A Marist Sectional Saturday, Nov. 1.

“This week I did not feel too good at all. My legs were dead pretty much the whole week,” Carter said. “I did all of the stuff I needed to do get healthy. I took ice bats. I drank coconut water, which is pretty rough. It hydrates you pretty well and I’m pretty bad at hydrating myself. It’s awful. I couldn’t let my team down pretty much.” 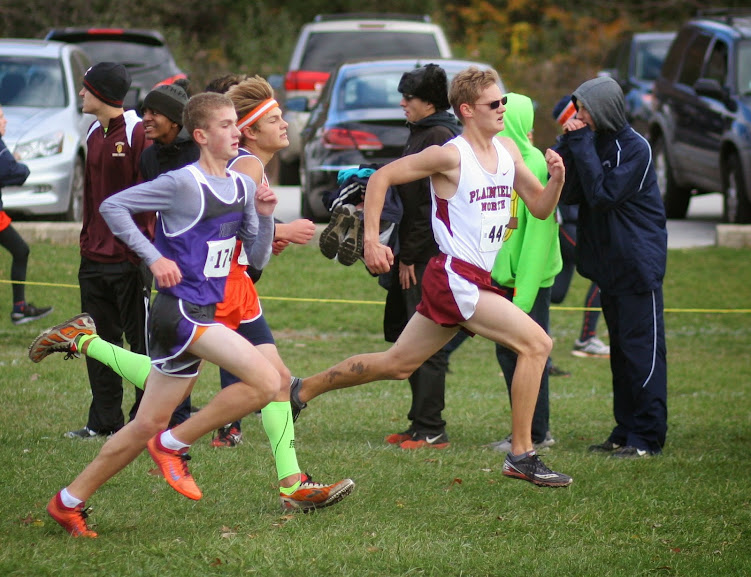 “I feel like I have a great shot to contend for the title, a really good shot,” Clevenger said. “Last year, I went into the state meet thinking I could win, but this year I legitimately think that I can get the job done.”

Clevenger, Christensen and Diamond were among last year’s state lineup that finished a program-best second place for the program’s first top-three trophy since third in 2000. Carter and Danner were among the five state alternates.

“It’s kind of like a dream (to compete) because I’ve always admired everyone running at state,” Carter said. “Seeing it last year, it’s such a cool experience and I wanted to be a part of it and make some history down there.”

This is the Trojans’ second straight team berth after missing the previous two seasons. On Saturday, they were expected to battle for the final advancing spot with Plainfield South and Oswego because the top-four rated teams were in the sectional field.

Instead, the Trojans (111 points) edged out Lyons Township (120) for fourth place with Oswego (154) and Plainfield South (187) a non-advancing sixth and seventh. Sandburg (39) handed defending 3A state champion Hinsdale Central (94) its first loss of the season with Neuqua Valley (96) third.

Diamond was emotional as he crossed the finish line, but not because he felt assured the Trojans simply had advanced.

“I was definitely really excited. I could just tell. Being the fifth runner, I could really tell where we placed,” Diamond said.


Downers North coach John Sipple is excited because he feels that his runners have even better races in them. Saturday was only the third day of their end-of-the-season taper so they should be as their peak for state.

“Place wise, I think if our guys execute their race plans and they finish where we think can finish, we should be in the conversation for a trophy, potentially. I don’t think that’s out of the question by any means,” Sipple said.

“We have a huge advantage with Ryan (contending for 1st), and Alec can run better than he did today. And I think Zac ran well and he’s coming along. Joe ran well, but I think he can run better. Jack was solid. But I think we can run better next week, which I think is the fun part. It’s not like we ran an awesome race today. It was good, very good but we definitely can run better.”

“I would think it’s between (Clevenger), Dale and Reiser (for the state title),” Sipple said.

Graduated teammate Zack Smith finished a program-best third last year with the fastest Detweiller time for a Downers North runner (14:23) after taking eighth in 2012. Smith became only the fifth two-time all-stater for the Trojans and the first to have two top-10 finishes.

At the First to the Finish Invitational Sept. 13 at Detweiller, Clevenger closed on Smith’s state time by running 14:32.4. Clevenger finished second at the invite to Reiser (14:20.5).


Those are the only two races that Clevenger has not won this season. Clevenger and Dale have not raced against each other this season. 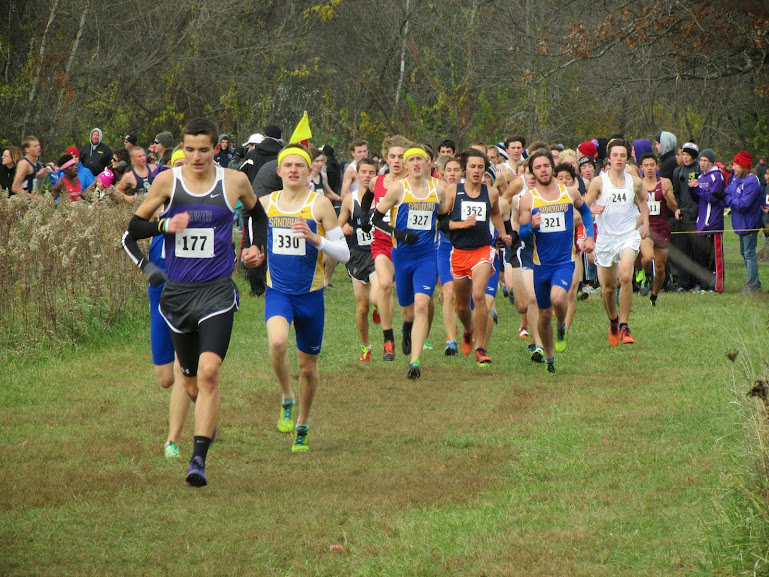 Clevenger dominated the sectional, running a 4:41 first mile to open a five–second lead. His 9:40 split at two miles built a 13-second advantage.


“It was really important for me to win this sectional, just to get another confidence booster going into the state meet,” Clevenger said. “This is the first time this year we were racing against Sandburg. I didn’t really know what they had in the cards. I knew coming in I should be able to win and get a fast time, which I did, and like I always say, I got another one point for my team. It always feels good to do that.”

Only nine of last year’s all-staters were non-seniors. Five of the top eight finishers were juniors, but only four non-seniors comprised the final 17 spots.

Danner is among those hoping to contend for those numerous all-state opportunities. Two sophomores were all-state in 2013.

“That’s the big thing, to get all-state, and to break 15:00 as well. I was a lot closer today. I (had a personal record) by seven seconds. If I could get all-state, that would be pretty sweet,” Danner said.

“(State) means so much to me. Basically just competing (is great) because last year I was just kind of go through the motions, watch everybody race, but now I actually feel like I’m a part of it and I’m contributing to all of the success of the team.”

Christensen and Diamond will make more significant team contributions than in 2013, when they were the No. 6 (114th, 15:41) and 7 (184th, 16:16) finishers, respectively. Both of them improved significantly Saturday from their 2013 sectional finishes of 48th (Christensen) and 78th (Diamond).

“I think what we did well (as a team) was just having confidence that we knew the course,” Christensen said. “We’ve been out here basically every week for the last month, every Sunday.”

The Trojans basically had their final team score in place by the one-mile mark with their top five among the top 45. Christensen was three seconds and nine places behind Danner at one mile, but he closed the gap to two seconds at two miles with Danner 14th and Christensen 18th. 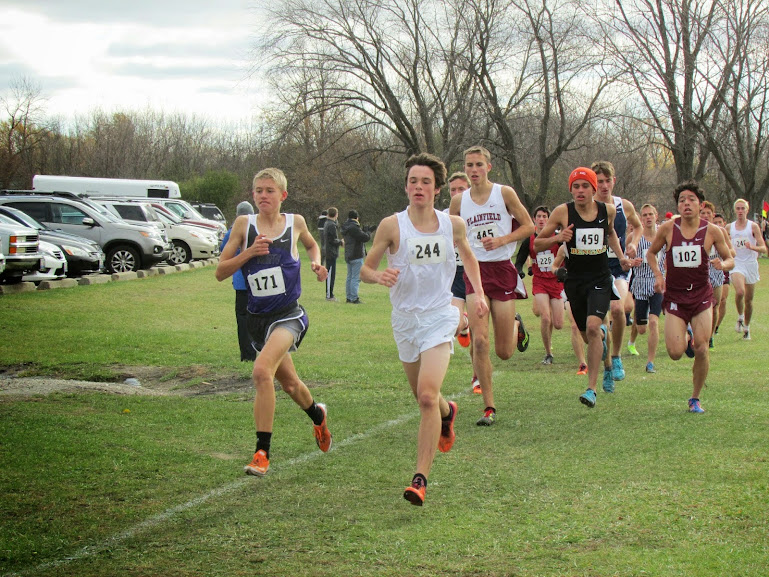 “We had our race plan down,” Christensen said. “I know the course so well and it goes by so fast if you know it well. We got out aggressively and stayed up as much as we could. We surged where we knew we were supposed to surge and it ended up turning out well.”

In the final 3A polls before sectionals, the Trojans were ranked No. 17 by both DyeStat Illinois and MileSplit Illinois.

“Really, if all of our guys come in with a good mindset and we’re all happy with the effort that we put out, we’re not going to be disappointed down there,” Diamond said. “Our place is going to come after that, but if we all come down there, do what we’re capable of doing, we’ll be happy with the place, no matter what it is. And it should be pretty high up there, I think.” 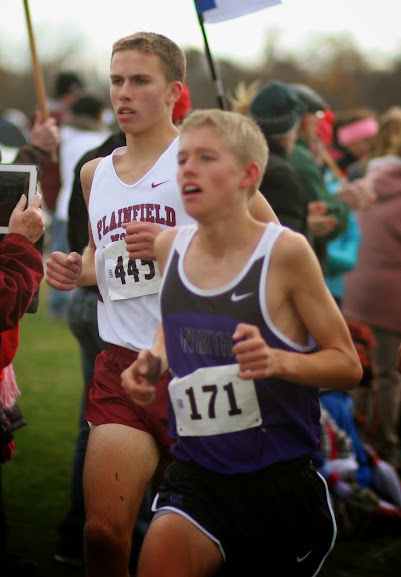